Carbon monoxide is a by-product of incomplete burning fuels such as wood, propane, oil, natural gas, kerosene, gasoline, diesel fuel, coal or charcoal.   It is a “silent killer” that shows itself when using appliances that are poorly maintained, damaged, blocked, poorly venting or have inadequate air flow.   You can’t see or smell carbon monoxide but it can be deadly if it accumulates inside your cottage, home or workshop.   What can you do?

Detector should be installed near the potential source of carbon monixide.

   Maintain your furnace, fireplace, and other fuel burning appliance, especially at the start of the season.

   Install a Carbon monoxide (CO) Alarm:  These alarms will warn you of rising levels of CO and allow you and your family time to escape. For persons with CO Alarms please note that you should replace your alarm every 7 years.

   Know the Symptoms of CO Poisoning. The symptoms are similar to the flu – nausea, headache, burning eyes, confusion and drowsiness – except there is no fever.

Radon is a colourless, odourless, radioactive gas that is produced through the decay of uranium found in rocks, soil and water.   When radon gas is released from the ground into the outdoor air, it is dispersed enough to not be a safety concern. However inside cottage buildings constructed with enclosed foundations or on cement pads, the radon gas can be concentrated in the basement. The dangerous gas can then be circulated to the upper floors by forced air heating and cooling systems. 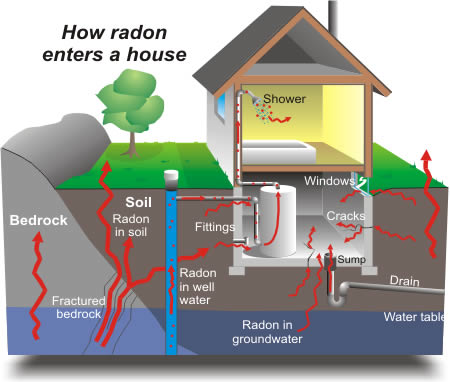 Radon is a higher risk for buildings with enclosed basements.

According to a report published in 2016 by Public Health Ontario and Cancer Care Ontario, radon is the second most deadly environmental carcinogen in Ontario (Ultraviolet radiation is first). The incidence of lung cancer among smokers and non-smokers increases significantly over an extended time period. People spending a few weeks at the cottage or in buildings with open space underneath the floor are not at significant risk. In the region of Bobs and Crow lakes, the Kingston, Frontenac, Lennox and Addington Public Health Unit (KFL&A) asserts that 11% of homes tested contained radon levels over 200 Becquerells per cubic metre. This is the threshold where human health can be compromised according to Health Canada. There have been several cottages on Bobs Lake that have recently tested above this threshold.

The KFL&A recommends that cottage owners purchase inexpensive radon do-it-yourself test kits, available through some hardware stores, or through radon contractors such as Mr. Radon in Kingston. The kits are typically around $80. The best place to test in the cottage is in the lowest occupied level, especially an enclosed basement over a minimum 3 month period.  The radon detector is then mailed to a lab where the radon level is measured.   Correcting a radon problem typically requires mechanical ventilation in the basement and venting to the outside.

An off-the-shelf kit will have most of the necessities, but to create a cottage ready kit, think about the hazards you’re more likely to find in cottage country (bugs, wildlife, pollen and other asthma triggers, the sun, poorly fitting hiking boots), and the potential difficulties of being in a remote location without easily accessible clean water and electricity. So, key items include antibiotic creams, antihistamines, moleskin for blisters, saline solution or sterile water, and ice packs that don’t need freezing. (If you leave these things in the cottage over winter, check with the manufacturers to be sure they’re okay to use after they’ve frozen and thawed.) The Canadian Red Cross, suggests adding a splint, since “it’s handy for injuries when help is farther away.” Similarly, a butterfly bandage— meant to keep the edges of a wound together so it doesn’t gape—is useful for a cut that can’t be stitched until you get to the ER.

A Safety kit combined with basic first aid training including CPR is an essential requirement for a cottage.

As well, other must-haves include gauze, triangular bandages, and nitrile gloves, made out of hypoallergenic synthetic rubber. For the times when a first-aid kit just won’t cut it is recommended you keep emergency contact numbers and info beside the phone or on the fridge. Another tip: Along with written directions to the cottage, keep a prepared list of questions to ask the injured, who may be guests or neighbours you don’t know well. Do they have allergies? Do they take medications? Do they have a history of medical problems? Getting as much information right away will really help the advanced care people when they step in. For Urgent Care Emergencies phone 911. Another option is to contact Telehealth: 1-800- 797-0000. For further information take a look at www.ontario.ca/healthcareoptions.

In recent years, many sightings of bears were reported around Bobs and Crow Lakes. Although black bears are not normally dangerous animals, they are, however, opportunistic omnivores. In other words they will eat practically anything that is easy to get at. Admire them, respect them.
What we should know about black bears: 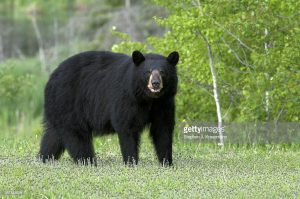 Around Bobs and Crow lakes, bears are most often seen near the garbage dumps.